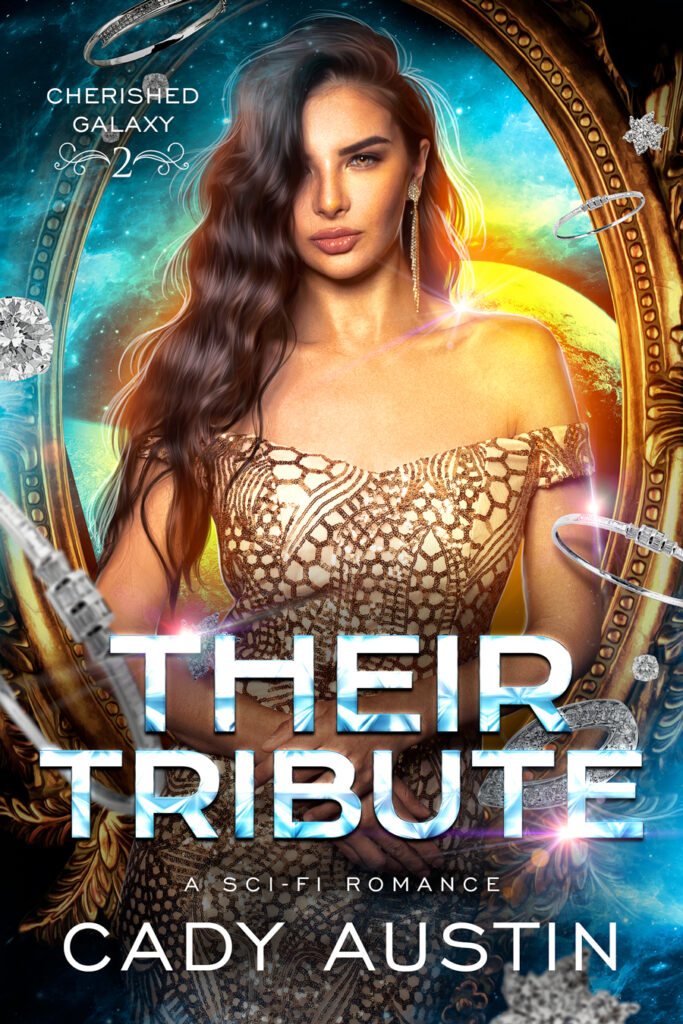 Our little homey scene was done for the morning. Leuwen was the first to leave, then Casen. Casen looked across the island at me, his mouth opening, and then he shook his head.

Sidling around the island, he crowded me in at the counter again, plucking my bowl out of my hands as soon as I popped the last bite into my mouth.

“Don’t wash our paint off so quickly,” he said.

Oh, now he was back to ordering me around. I scowled and snatched my bowl back.

“Why shouldn’t I wash off your paint? We’re not in some mating dance. It’s just business. I go home after this, remember? We had some fun, but it’s not like we’re going steady.” My cheeks burned as Beirul watched me drop my bowl into the sink.

“Going steady?” Beirul shook his head and cornered me against the sink before I could move away. “Never mind. You’ve made a mistake thinking anything about us is business.” He leaned over me, and my back dug into the counter. The air turned heavy, weighed on my skin, imaginary mouths nipping at my neck and shoulders. The heat of him was addicting. “Unless our definitions of business are vastly different, my version doesn’t include you creaming on Casen’s knot like you did a few hours ago.”

Was I still here? Or was I a puddle of goo? Swallowing, I forced some strength into my limbs and gave him an unimpressed look.

“You can think what you want, but the lines are very clear for me. I will go home after my duties here end. Unless you plan to go back on your word?”

His head dipped, hand landing on my waist and leaving fire in his wake. “Never. You do your job, and we’ll return you to the commune,” he said. His gaze dropped to my lips. “But while you’re here… our deal said nothing about convincing you to stay.”

Stay. Stay here with aliens who could do whatever they wanted to the stupid tribute without repercussion. But my stupid heart jumped at the idea.

“That’s big talk after one night.”

Beirul squeezed my side. “I expect a lot more.”

Relief wasn’t the exact feeling that overcame me when he backed off. Anticipation like an unfinished question simmered under my skin; Beirul’s slow smile promised all the answers.

I suddenly felt like a blank test, and he would fill me in.

His head dipped toward me. “I can help you with this paint situation, you know.”

My breath escaped me, the flecks of silver-white in his gaze mesmerizing. A little closer and he could kiss me. “You can?”

The way he closed me in should’ve felt claustrophobic. Instead, I realized how very thin my dress was when his overwhelming warmth seeped into me. “Very easily,” he said, drawing down. I had no choice but to lift my chin and let his lips brush mine. My body sung in response, chest humming, my hands pressing against his chest.

We hadn’t fucked last night, and I’d wanted to. Something had held him back and I hadn’t pressed. But right now, all I wanted to do was climb up his hard body and go to town.

He pressed harder, the edge of the cabinet biting into my back. He ghosted over the sides of my breasts, teasing, and I arched into that gentle touch. Then he drew down my body, releasing my mouth as he hit his knees.

Beirul gripped my ass and lifted me up. I gasped and scrambled at the counter behind me until my ass was on the edge of the countertop. “What’re you doing?”

Tall enough he needed to dip his head to reach the juncture of my thighs, he looked deliciously devilish as he pushed up my skirt. “Slaking my thirst.”

“Knows how to be discreet. Now spread your thighs so I can paint you.”

“I told you it would be easy.” He licked his lips when he pushed up my skirt and found me bare in every way. His breath warmed my sensitized skin when he leaned forward, every syllable a torture on its own. “Oh, starshine. You beautiful creature. Is this all for me?”

“I thought you were going to paint me.”

He flicked his head back, the black and gold paint on his horns sparkling in the kitchen lights. “When you beg, Em.”

I twitched, wanting to grab him by the horns but not wanting to give him the satisfaction of smudging his paint. “You sound confident.”

He leaned forward and breathed across my hypersensitized skin. “You’ve no vekking idea.”

It wasn’t fair. He shouldn’t make me want this much. I captured my bottom lip between my teeth, biting down on a moan that wanted to escape. A moan I wouldn’t give this devilishly irritating Broqu. Not until he earned it. Drawing his hand up the inside of my thigh, each moment a torture of its own, he reached my center and ran his thumb over the slickness already coating my lower lips. It couldn’t have been a lighter—or more maddening—touch and I swallowed my complaint when he drew away.

“You know we don’t have much time,” he said. “Audent could come in any moment.”

The way he bit his bottom lip and looked at me under his dark brow should’ve been illegal. “I thought you said she was discreet.”

“Beirul, if you’re only going to tease—”

He didn’t let me finish. Before I could even touch my skirt to pull it down, he covered my mound with his mouth. Licking me from ass to clit before he clamped his mouth over my clit and sucked for all he was worth.

The next second his hand clamped over my mouth before my shout could finish echoing in the kitchen. My hips jutted and he growled excitedly, his raspy tongue wicked on my clit. A ravenous, growling beast. My head fell back, his free hand roughly squeezing and pinching my breasts. There was no control. Urgency drove us, made me slam my eyes shut and thrust my hips and hope that no one could hear the pitiful whimpers I was trying to bite back.

I came so hard my head smacked against the cabinet. It wasn’t only stars in my eyes, then, but I rose above the pain, toes curling in my sandals, hands slapping down on Beirul’s horns as his tongue lapped up every ounce of my orgasm until I was a pitiful, panting, painted mess.

Beirul pulled back while I gasped down at him. He licked his lips before he grinned.

I rolled my eyes and used my grip on his horn to shove him away. Not that he budged any. He only grinned wider. “You’re awful.”

“I’m your awful,” he said to my rising blush.

Then came a screech and a horrifying, terrible sound: “Oh my!”

“Audent!” snapped Beirul. He bounced to his feet and quickly covered me with his body. A scamper of feet. A moment of silence.

I buried my head against his chest. Let there be a just universe and let it swallow me whole.

“Well,” Beirul said, swallowing as he leaned back to meet my glare, “that was one way to put my paint on you.”